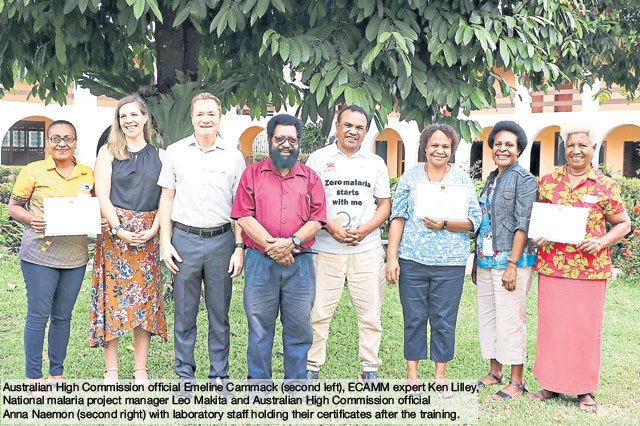 “I’m so happy I have maintained top levels since my first assessment in 2013, where I scored a level one,” microscopist Lina Lorry said.
Lorry is a researcher focusing on malaria and other malaria borne diseases.
“In 2016, I scored level two and now I went back up to a level one again.”
Lorry leads a team of five researchers at the PNG Institute of Medical Research and she was one of the top-performing participants, an achievement she has tried to maintain for the past six years.
Microscopists are assessed
every three years to renew and refresh malaria microscopy competency.
Supported by the Australia-China-PNG trilateral malaria project, the four were among 12 participants, who undertook the five-day assessment before graduating on Nov 8.
The WHO-certified external competency assessment of malaria microscopists (ECAMM), evaluates the skills of microscopists in detecting and diagnosing malaria in blood samples using a microscope. During the assessment, each participant was graded based on the WHO’s competence levels from one to four, with level one being the highest.
According to global standards, the detection of malaria parasites through microscopy remains one of the best methods for malaria diagnosis.
Incorrect or delayed diagnosis and treatment of malaria can lead to serious illness and even death in patients.
Also gaining a level one certification was Dr Paula Pusahai-Riman from the University of Papua New Guinea, who took the assessment for the first time.
“I’m a lecturer and the head of the medical laboratory sciences course at the school of medicine, but I have never done this assessment before,” she said.
“This assessment will definitely add value to my teaching methods.” Other high achieving participants were Carol Gaudi from Nonga Base General Hospital (East New Britain) and Ernest Velemu from the Central Public Health Laboratory, both of whom maintained their level one status.
The assessment was facilitated by ECAMM expert, Ken Lilley from Australia.