PNG Doctor describes diabetes as a disease of choice

Diabetes, Health News
Medical SPECIALISTS in Papua New Guinea  say type two diabetes (TTD) is actually 95 per cent lifestyle and environmental disease.
International Diabetes Day was celebrated at the Lae International Hospital (LIH) yesterday.
LIH doctor Edgar Lumpay described diabetes as a disease of choice where one choose his or her type of food and activities they want to have. 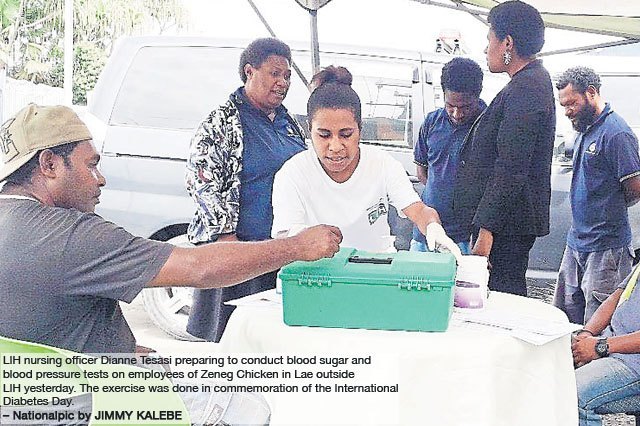 “Over two years ago, more than 600,000 people in Papua New Guinea were diagnosed with TTD and that number is increasing,” he said.
TTD has a strong connection with high-fat content food (highly processed foods) and when fat content is high in the body, it ends up to obesity, he said.
According to American Diabetic Association, studies show that all processed foods worldwide generally contain 15 per cent protein and the rest fat.
Lumpay said in PNG many people consumed a lot of processed meat products like lamb flaps, pork, beef, sausages and others which were very high in fat.
“There is a strong relationship with fat and diabetes so people must now think of switching to garden food or consuming a lot of starch and more exercise other than keeping to the lifestyle foods,” he said.
He said TTD was common among people 50 years and above and it was increasing in the country because of the type of food that is consumed and lack of exercise.
Lumpay some symptoms of diabetes were; feeling thirsty often, urinating a lot, losing appetite and suffering unexplained weight loss.