Niblett recognised for services with order of Lohohu Award 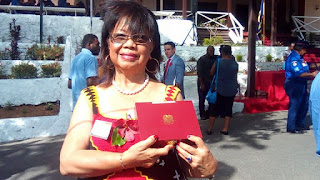 Long serving doctor at the Lae Angau Memorial Hospital Cancer Ward, the late Dr. John Stokes Niblett received an award for the member of the Order of Logohu for his services in health for cancer management in the country.

The award was received by his wife Mrs Andrea Niblett yesterday at the government house from the Governor General Sir Bob Dadae following the orders of PNG 2017 New Year’s honours Investiture ceremony.

“I’m happy that he received this award. He was still alive when it was announced last year; however he passed away without really receiving the award which I received on behalf of him,”
“I’m so happy that the government recognized the contribution of my late husband Dr John Stokes Niblet for what he has done for Papua New Guinea,” said Mrs Niblett.